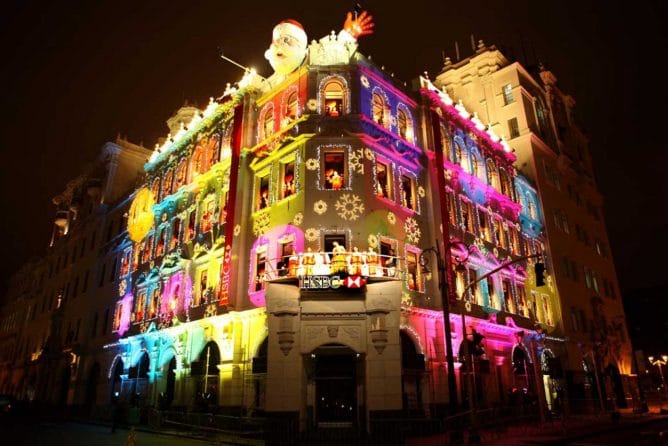 Christmas full of music in Peru

Are you wondering how peruvian people celebrate Christmas?

The answer is full of music!

Hello again, Dear reader. Peru is a catholic country and every december 25th we commemorate the birth of the baby Jesus. This celebration In this celebration families gather around the Christmas tree, the nativity scene and have a delicious Christmas dinner while listening to Christmas carols.

You will be hearing their music everywhere, so keep reading our article to know more about these and other songs you will be listening to during the month of December!

As you previously read, December’s festivities are no different from others, as they are filled with special music for the occasion.

Our country has a tradition of commemorating holidays with joy, with friends and family while singing, or those who are not so good at this art, dance to the rhythm of the variety of music that we have in Peru.

In Peru It is a Christmas full of music!

In fact, we have Christmas music in every major region of Peru: music from the coast or Creole Christmas carols, Carols in the Highlands and in The Jungle.

On the coast, the best known songs are the ones of “Los Toribianitos”.

This is a group of children singers that was born in Lima. Its history dates back to 50 years ago, when Father Aquino was a teacher at the “Santo Toribio del Rímac” school, where he formed a band of school children and led them to win a contest.

Thanks to this, they quickly became well known and began to appear on television and create several albums of music for celebrations.

Due to the magazine called “15 minutos”, this band was maintained over time thanks to Father Aquino and the new generations of students at the school. It is said that they were even called “los toribianitos del Perú” (the little toribians of Peru), since their cherry uniform faded and turned red. This assimilated to the colors of our flag: red and white.

Los Toribianitos’ songs are the following:

And many others that you will be able to listen in their álbum “Todo el año es Navidad” (All year is Christmas).

Nicomedes Santa Cruz was the maximum representative of negritude in Peru as he was a black poet, journalist and folklorist who touched on the subject of how Afro-Peruvian culture influenced the history of Peru. He and his Conjunto Cumana have a Christmas song with tenths of Santa Cruz in which they tell how they lived the birth of Jesus and the Afro-Peruvian reality.

A few years ago, great representatives of Creole music got together to make a new version of Christmas songs, but with Creole rhythm. Among the singers we find Eva Ayllón, Edith Barr, Bartola, Pepe Vasquez, Guajaja, among others.

As for the Jungle, different groups have released Amazonian versions of well-known songs, such as “Conjunto Amazonas”, who have songs like:

In the case of the Peruvian highlands, It is also a Christmas full of music. The instrumental group “Los hijos del Sol” released less than 5 years ago an album that can be found on Youtube called Navidad Andina (Andean Christmas).

In this album we find the well-known Christmas songs that have been heard for years in Peru, but in an instrumental version, with quenas, zampoñas and charanguitos.

We also found another children’s choir, called “Los niños cantores de Huaraz”. They were selected through a contest by the Spanish Friar Jose Luis Estalayo. They were children from Huaraz, an area where the friar was doing parochial works.

Although the band did not last long, because the Fray was sent to another country, they were successful and released 3 longplays. In these we can listen to the following songs:

On the other hand, in addition to these versions made by Peruvians or, in some cases, covers, we also hear a lot of songs by international artists of different musical genres such as:

As you may have noticed, if you are already in our country or you are thinking of coming for holidays, you will spend a Christmas full of music in Peru!

Also, if you want to listen to our playlist, you can find us on Spotify by clicking here.

We hope you liked this article with a lighter tone, but just as interesting and cheerful.

This is a month of joy in Peruvian Sunrise and we hope to share it with our visitors!