June: a month of celebrations in Cusco!

Hello, dear traveler! Did you know that June is the most important month for Cusco? Not only because it is already in dry season with warmer days (great for traveling), but also because in addition to the renowned celebration of Inti Raymi, there are dances, processions, ceremonies, shows that involve both locals and people from all over the world!

Do you want to know the festivities that you can be part of in June, the jubilee month of Cusco? Keep reading!

Sanctuary of the Lord of Qoyllur Riti The pilgrimage to the Sanctuary of the Lord of Qoyllur Riti (Lord of the shining snow) begins and ends in the district of Ocongate, Quispicanchi.  Thousands of faithful from Cusco and all over the world traditionally come to this place. Nowadays is an Intangible Cultural Heritage of Humanity.

The main event is held at the foot of the snowy Colquepunku, with more than 5,000 meters above sea level, in Sinakara, where the image of Christ is impregnated in the rock of a grotto and where the sanctuary that summons the faithful pilgrims every year has been built.

The crowd that makes the pilgrimage is made up of 8 groups known as “nations”, which correspond to their towns of origin: Paucartambo, Quispicanchi, Canchis, Acomayo, Paruro, Tawantinsuyo, Anta and Urubamba. Upon arriving at the grotto, these groups greet the image of the Lord of Qoyllur Riti in an orderly fashion.

The “pablitos” and “pabluchas” are key characters of the Andean world, outstanding in this celebration, since they are in charge of taking care and ordering the whole displacement.

Would you like to travel for this date? Wait, there’ s still more to come! Every year, in the second week of June, is celebrated in the district of Quehue, in Canas, Cusco, the annual renewal festival of the Q’eswachaka bridge, which crosses the Apurimac River. Unesco recognized it as Intangible Cultural Heritage of Humanity in 2013.

The Q’eswachaka is the only suspension bridge made entirely of vegetable fibers, 28 meters long and 1.20 meters wide ichu. It was part of the Qhapaq Ñan or Inca Trail and is the only Inca bridge that has been maintained since Inca times, thanks to the fact that it is renewed annually in this celebration. Around 1000 villagers, men and women, gather following an organization based on the minka (mutual aid in Quechua). The women are in charge of braiding the ichu while the men are in charge of removing the broken ropes and replacing them with new ones. They also participate in the offering ceremonies to the pachamama (goddess of the Earth) and the apus (god mountain), in charge of an Andean priest. 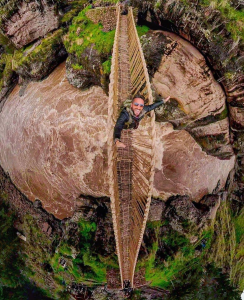 As we saw in the article dedicated specifically to this festival in honor of the Sun God, the Inti Raymi was the most important celebration of the Inca empire and currently. It is currently the main festival of the jubilee month of Cusco.

It occurs between the final period of the harvest and the beginning of the winter equinox of the Andes (second half of June).

The esplanade of the temple of Coricancha, the Plaza de Armas and the fortress of Sacsayhuaman are the scenarios where the Inca and his retinue of more than 700 people performing in this impressive show that is a Cultural Heritage of the Nation and Main Ritual Ceremony of National Identity since 2001. This is one of the most emblematic festivities of Cusco and Peru, which is a Cultural Heritage of the Nation since 2004. People have enjoyed this popular celebration, which expresses the Andean-Catholic religious union, for more than 400 years, 60 days after Easter Sunday. “When the Spanish conquerors arrived in the capital of the Inca empire (Cusco) they saw that in a solemn ceremony prior to Inti Raymi the mummies of the sovereigns were taken out in procession. As part of the Catholic evangelization, the ecclesiastical authorities of the time decided to replace those references by religious images of Christ, the saints and invocations of the Virgin Mary”. This is how one of the main festivities of the Cusco calendar was born. We have reached the end of this brief article. However, we are sure that after reading it, it has provoked you to travel to Cusco at this time and be part of these different and fun activities.

Don’t forget that If you have any doubts, questions or need more information to make up your mind about traveling to Peru, you can contact us!