Learn more about Inti Raymi, the most important festival of the Inca empire.

As its name says, “The Feast of the Sun” is a festival held to honor the Sun God since the time of the Incas.

It is said that “the Inti Raymi is the most colorful garment that the festivities of Cusco have to show to the world”.

If you are going to travel to Machu Picchu, Cusco or any other destination in Peru, keep reading the article to learn more about this celebration that takes place annually in June and is part of our culture.

Honor to the Sun God Inti Raymi is celebrated every June 24, during the winter solstice. It is the most important festival of the Inca empire in honor of the Sun God and having been a celebration of the whole Tahuantinsuyo, it is celebrated not only in Peru, but also in Ecuador and Bolivia.

Did you know that this tourist spectacle was formerly an Inca ceremony?

Yes, in fact this is one of the times when more tourists visit us. You can even buy tickets to attend this show that will allow you to connect with an ancient culture! Its celebration lasted 15 days, in which there were dances, ceremonies and sacrifices. The last Wawa Inti Raymi with the presence of the Inca was held from June 21, 1535. It was forbidden by Viceroy Alvarez de Toledo in 1572, since this and all the others were considered pagan festivities. Because the people were very believers and felt that part of their beliefs were being taken away, they began to celebrate it clandestinely. 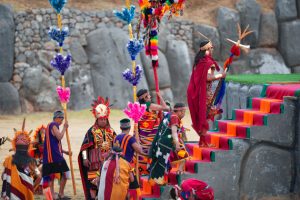 In 1944, the intellectual and artist from Cuzco Faustino Espinoza composed a historical reconstruction of the Wawa Inti Raymi to attract the tourist flow to Cusco and, because the 24th was a non-working day for the “Feast of San Juan”, had been declared Day of the Indian and was part of the week of the City of Cusco, it was decided to change the day of the solstice from June 21 to June 24.

How did the Incas used to celebrate?

At the time of the Incas, this ceremony was held in the main square of Cusco, which was formerly called Huaycapata and attended by the entire population of the city, approximately one hundred thousand people.
In the winter solstice is the shortest day and the longest night of the year and that was important for the Incas, as it represented the new year and the origins of their culture. Everyone went with their finery, as it was also a festival with high political content to go all the representatives of the small towns conquered Inca regime and thus demonstrate their loyalty to the emperor. The preparation of the festivity was strict and the 3 days prior to the celebration only ate a little white corn, raw; herbs and pure water. Likewise, on these days they did not light fires in the whole city and they abstained from sleeping with their wives”. For the ceremony itself, the virgins of the Sun prepared corn muffins.

On the day of the solstice, the Inca and his relatives waited shoeless for the sunrise in the plaza. Squatting with open arms and giving kisses to the air, they received the sun.

Then the Inca, with two wooden “keros” (glasses), toasted the chicha de jora: from the glass he held in his left hand his relatives drank; the one on the right was poured and poured into a golden jar. In the golden temple of Coricancha, the sun was worshipped and the offerings brought from their villages were made, then they returned to the plaza, where the massive sacrifice of livestock was made before the new fire, which was lit using the golden bracelet of the chief priest as a mirror. The meat of the animals was distributed among all those present, as well as a large quantity of chicha (traditional drink), with which the festivities continued during the following days until the end of the festivity.

In the ancient capital of the Tahuantinsuyo, Cusco, the Inti Raymi has a ceremonial character and also a costumbrista motivation. A spectacle that is directed to Peruvians and foreigners is carried out.
To the villagers it fills them with enthusiasm and incites massive participation, since it represents the union with a majestic past. Approximately 700 actors participate in this ceremony.
The new version of the Inti Raymi, full of color, music and dance, was a project that was born thanks to the work of Humberto Vidal Unda and Faustino Espinoza Navarro, who for many years also represented the Inca.

With more than seventy years of existence, the new Inti Raymi is now an inseparable part of the life of Cusco. Not only is it the central act of the month of June in the city, but its fame has transcended Peruvian borders, becoming an emblematic spectacle of Peru. So much so that in 2001 it was declared Cultural Patrimony of the Nation and Official Act and Main Ritual Ceremony of National Identity in 2001.

What does it consist of?

It takes place in its three usual scenarios:
Coricancha Temple, Plaza de Armas and Sacsayhuaman.
The show begins in front of the Coricancha, where a fictitious Inca performs an invocation to the Sun. The spectators wait in the esplanade of Sacsayhuaman, where the central ceremony takes place, which begins with the ceremonial emplacement (the Inca is carried by groups representing the inhabitants of “The four regions” or regions (Collasuyo, Contisuyo, Antisuyo and Chinchaysuyo). Then come the rites of the chicha, the sacred fire, the sacrifice of the llama (Andean camelid) and auguries, and the sankhu (sacred bread). The Q’ochurikuy (burst of popular exaltation) puts the final point to the staging.

Inti Raymi has also joined the movement of environmental care and therefore sustainable practices and more effective reduction strategies were defined, which went hand in hand with an awareness campaign and training to tour operators and traders in order to mitigate the carbon footprint of the festivities that are part of the “Inti Raymi”.

A show of this magnitude must always ensure the safety of its community. For this reason, the government has implemented Plan Sol, an inter-institutional program for security, order and cleanliness, with the participation of the National Police, Civil Defense, firefighters, Red Cross, Health sector and the Public Ministry. We are sure this information will be very useful for your trip. If you have any doubts, questions or need more information to make up your mind about visiting our country, contact us!

Mysteries and unknowns about Machu Picchu Discover the mysteries behind this wonder of the world.…