If you are planning a trip to any destination in Peru,

you should know or important peruvian holidays

Holidays are some of the best times to travel to a country, because there are usually shows, activities, dances, music and typical food of the country. In fact, in many cases, in these days there are usually non-working holidays, so the celebration will be much bigger and more fun.

It will also allow you to get closer to the culture of the country, learn about the history, traditions and customs of the place.

While recreational and cultural tourism options increase, it is also necessary to know these dates, since some places may close earlier or all day, due to the fact that there is a non-working holiday.

In order to help you plan better from your suitcase to the implements you should take, we invite you to know the festivities and holidays in Peru.

Holiday- No need to explain much here, it’s the beginning of the year! Many use this holiday as a day to rest from the New Year’s party or to see their loved ones.

Peru is a mostly Catholic country (75%) and this celebration has its origin in the writings of the bible. As its name says, it celebrates the arrival of the three wise men Gaspar, Melchior and Baltazar to the birth of the baby Jesus and offer him gold, frankincense and myrrh. On these dates, traditions range from keeping the nativity to activities such as traditional dances, meals and parades. In Ica, for example, they dance the dance of the negritos.

Performance of the 3 wise men This holiday has to do with the day when the Spanish conquistador Francisco Pizarro founded Lima, on January 18, 1535, and called it “The City of Kings”. It was the capital of the Viceroyalty of Peru, due to the strategic location of the area, which is located on the Peruvian Coast.

This day is celebrated the day of love and friendship in Peru and in different parts of the world. You will see many couples in the restaurants (since food is never missing in Peruvian celebrations), on the boardwalks, walking with their gifts…you can really breathe love on this day. In Peru, this commemoration began in 1983 with the “Canto a la Vida” Festival, in the city of Lima. The State joined the celebration in 1996 through the MIMP.

This is the beginning of an important week more than anything else for religious people, in which they celebrate the passion of Christ. The dates are not exact every year, since it has to do with the lunar calendar, so it is always good to consult before. On these dates meat is not eaten. On the other hand, being a long holiday, many people take advantage of it to make national and international trips or to relax.

This is an international holiday in commemoration of the events that took place in Chicago, United States, in search of respect for workers’ rights. On this day, depending on the industry, businesses are closed.

Mother’s Day: Second Sunday of May

A group of students from San Marcos University had the idea of also paying tribute to the mother, as in other countries and cultures. The Peruvian society supported the intention of the promoters and since 1924, the second Sunday of May is officially Mother’s Day in Peru.

This celebration commemorates the patron saint of the Amazonian regions since the time of the Spaniards and the one who baptized Jesus, Saint John the Baptist. In a normal context, people go to take a “blessed bath” in the most important water fountains of each city, in addition to their dances and typical food. Inti Raymi means Festival of the Sun and was established by the Inca Pachacutec to honor the main divinity of the Inca empire: the Sun God. It has been celebrated since 1430. Currently, a show is performed and this begins with the sunrise in the temple of Coricancha. Then, in the Plaza de Armas of Cusco, an actor representing the Inca greets the current ruler of the imperial city: the mayor of Cusco and this represents the meeting of two eras. Finally, the attendees go to the fortress of Sacsayhuaman to witness the representation of the Inti Raymi, full of music and color. June 24: Day of the Peasant

The “Day of the Peasant” was created during the Agrarian Reform Law on June 24, 1969. Previously called “Day of the Indian”. It is a date to celebrate their great work.

In 2008, the Ministry of Production designated Ceviche Day to be celebrated every June 28 due to its cultural and gastronomic value. This is a celebration of the Catholic Church towards the patron saints of Rome, who spread the gospel. As Peru is a Catholic country, this date is considered a holiday.

Thanks to the establishment of Father’s Day in the United States, many Latin American countries, including Peru, established that the third Sunday of June would be celebrated on this date.

This day celebrates that on July 24, 1911, the world learned about the Inca city of Machu Picchu. On that day the American explorer Hiram Bingham “discovered” the Inca monument located on the heights of the mountain of the same name, in Urubamba, Cusco. This day celebrates that on July 28, 1821, the general of the Argentinean Army José de San Martín, as part of his liberating expedition, proclaimed the independence of Peru in the Plaza de Armas in Lima, ending almost three centuries of viceroyalty, that is, the end of the Spanish colony. In addition, every 5 years, this is the date of the change of command (president).

Feriado- July 29 is the day of the parade or military parade, in which the armed forces and police participate exhibiting their land and air equipment. The city of Arequipa was founded on August 15, 1540, under the denomination of “Villa Hermosa de Nuestra Señora de la Asunta” in the name of the Marquis Don Francisco Pizarro and on September 22, 1541 the monarch Carlos V in a Royal Decree orders that it be called “City of Arequipa”. Saint Rose of Lima was the first woman in the American continent to be declared a saint. Although her death was on August 24, the 30th was added as a celebration, being the closest day to the anniversary of her death.

Feriado-The combat of Angamos, where Admiral Miguel Grau Seminario died, took place on October 8, 1879. The naval battle took place at Punta Angamos, which at that time belonged to Bolivia. The Huáscar was heading for the northern coast of Chile, after having completed several offensive operations and upon seeing it, it was attacked by Chilean ships of the latest generation.

The reason why we call October “the purple month”!

The Christ of Pachacamilla became the protector of Lima after the wall where they painted his image survived intact several strong tremors and attempts to erase it. One of these tremors caused Sebastián Antuñano, a great promoter of the faith of the Lord of Miracles, to order an oil copy of the image to be made so that it would go out in procession through the streets of Pachacamilla. The tradition continues to this day and travels the streets of Lima along with thousands of the faithful in their purple habits. Actually, the celebration of the Day of the Creole Song was established on the same day as the festivity of the Lord of Miracles so that they would coincide; however, it was not until the death of Lucha Reyes, singer who popularized Creole music, (October 31, 1973) that they changed the celebration to this day in her honor. On this date there are parties, Creole music, food and typical dances. Also, there is usually a dispute between those who celebrate this Peruvian holiday and Halloween.

Creole party to the rhythm of the peruvian “cajón” This was an Irish custom that said that between the last day of October and the first day of November, the world of the living and the world of the dead come together. Later, thanks to the USA, the word “Halloween” appeared, which is the union of the words All Hallow’s Eve’, that is, the eve of the Feast of All Saints.

Although in Peru many people celebrate this holiday, especially children who dress up in costumes and go out begging for candy, it has to do with the influence of the American celebration.

This is another Catholic celebration in which Pope Gregory III, during his tenure in the church between 731 and 741, chose November 1 for the commemoration of the lives of the saints.

Holiday- The Day of the Immaculate Conception of Mary was formally declared on December 8, 1854 by the then Pope in office, Pio Nono, who after receiving petitions from different universities around the world, gathered in St. Peter’s Basilica.

Holiday- This is a new holiday enacted on 12/31/21 that commemorates the Battle of Ayacucho, which took place on December 9, 1824 and consolidated the independence of Peru.

Representation of the Battle of Ayacucho 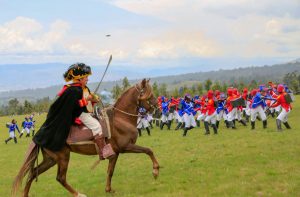 Unlike other countries where they celebrate only on the 25th, peruvians celebrate Christmas Eve on December 24th, when the birth of the baby Jesus is awaited and Christmas dinner is eaten. For this, Christmas trees are assembled, delicious typical foods are prepared and a representation of the nativity scene is staged. In Cuzco, on this day you have the Santuratikuy, which is a fair where saints are bought every year as a tradition. Feriado- On this day, we celebrate the birth of the child Jesus and many gather to have lunch with the family. As in most countries around the world, on this day people celebrate the end of the year and have parties, dinners and trips to welcome the new year in the best way!

We are sure this information will be very useful for your trip. If you have any doubts, questions or need more information to make up your mind about visiting our country, contact us!